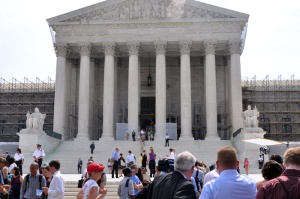 The recent ruling by the U.S. Supreme Court should put to rest any notion of North Carolina trying to enact an Arizona- or Alabama-style immigration bill. While we remain concerned that the ruling could leave the door open for legalized racial profiling, the Court has made clear that immigration policy and enforcement should be left up to the federal government.

States and localities are rightly turning away from these laws as divisive, costly, and ineffective. Instead, they’re looking for common-sense approaches that uphold our nation’s values and move us forward together. That means national immigration policy reform that creates accountability and a pathway to citizenship. It means laws that promote public safety and uphold due process and equal justice. And it means integrating new Americans into our economic engine and social fabric, including through English-language learning. Increasing numbers of states are rejecting divisive laws, and voters are rejecting politicians that promote them.

Arizona and Alabama have already poured extensive political capital and millions of dollars down the drain in this losing fight. For example, the architect of Arizona’s SB 1070, State Senator Russell Pearce, was recalled in a special election. Arizona lost at least $140 million in tourism alone because of national boycotts. Alabama farmers saw millions of dollars worth of fresh produce rot on the vine while Latino children stayed home from school in record numbers. And Alabama received a slew of bad headlines after accidentally detaining a Mercedes-Benz executive for not carrying his passport. All this for a misguided approach now deemed unconstitutional by the Supreme Court. The results are in: the Arizona approach is not only unconstitutional, but also ineffective and costly.

Here at the North Carolina Council of Churches we see how faith communities are putting their faith into action every day, ministering at the front lines of the immigration debate by offering English courses, meals, job training, and pastoral care to people facing very challenging situations.

Denominations at the national and state levels are united in their commitment to practice hospitality with immigrants. From Evangelical to Mainline Protestant, from Roman Catholic to Unitarian, from Lutheran to Mennonite, from Episcopal to Southern Baptist, churches of every race, color and creed are standing together to welcome their neighbors and reject the politics of scapegoating and division.

These faith communities all agree that the way to reduce unauthorized immigration and the way forward for millions of hardworking immigrant families is through comprehensive immigration reform at the federal level, providing a path to citizenship, putting all workers on a level playing field, and reuniting families.

Several months ago, when the North Carolina House Select Committee on the State’s Role in Immigration Policy accepted comments from the public, more than 55 faith leaders weighed in from across the state.

One faith leader from Raleigh said, “While it is, of course, legitimate for our country to develop and enact fair, sane, and compassionate immigration policies, the discriminatory Arizona and Alabama laws lead to a ‘guilty until proven innocent’ atmosphere, an increase in anti-immigrant vitriol, and a weakening of the local economy. I plead with our legislators to … reject anti-immigrant rhetoric and legislation and, instead, support policies that will build our state’s moral character and encourage economic growth.”

The darkest chapters in our past are ones where we have obscured the humanity of others. As people of faith, we will not be silent when it happens again. The Supreme Court has made it clear – it’s not an option for North Carolina to walk the losing path blazed by Arizona and Alabama. Instead, it’s time for Congress and the President to work together to chart a course toward a better future.

Rev. George Reed and Chris Liu-Beers are with the North Carolina Council of Churches.