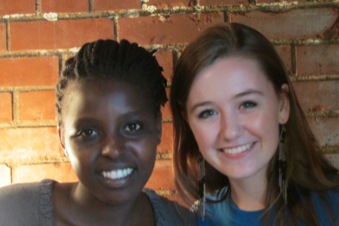 Last week about 150 women gathered from across the Triangle to hear the stories of “Ruth’s Journey: Building Communi-TEA.” This one of a kind interfaith tea and dialogue focused on conversation about the impact of immigration on women and their families.

The afternoon featured several pairs of women who have become strong friends despite coming from different backgrounds. For example, Casey Smith is an 18 year-old high school student here in the Triangle, while Aline Nyirashimwe is a 23 year-old from the Democratic Republic of Congo with a husband and two young daughters.

When Casey and Aline first met, they did what most of our conversation partners do: they began working on grammar charts and building necessary vocabulary. But slowly, their relationship began to change as a real friendship developed. Casey and her mother Lori took Aline and her daughters Yvonne and Joyce to the library, taught them the local bus system, and helped them integrate into the community. As Casey and Lori shared information with Aline and her family, they realized that they too had a lot to learn.

Even as a refugee in Kenya, Aline had refused to give up on herself. She had used her education to work for a refugee consulting group that assists abused and traumatized women from Congo, Burundi, and Rwanda. Even though Aline was a refugee and had experienced many horrors herself, she worked as a counselor for other refugee women from her region. Aline’s story helped Casey understand that refugees are not simply victims, but they are brave and strong people who are fighting for a better world, just the way that she hopes to do.

Women comprise half of all immigrants coming into the U.S. every year, work for universities, hospitals, care for America’s children and the elderly, and are the backbone of America’s economic engine. Torn apart from their own families and with less access to legal and social services than many U.S. citizens, immigrants are often forced to live in a perpetual state of fear as victims of domestic violence and human rights abuses. Now is the time to ensure that every woman and girl can come out of the shadows and fulfill their full potential, and granted full rights under the law.

We’ll be posting more stories, pictures and videos from Ruth’s Journey in the next few days.